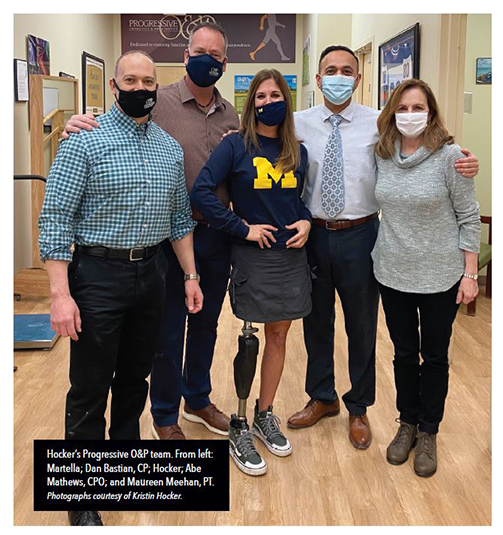 You won’t find it easy to catch up with Kristin Hocker—she’s a very busy woman. Mom of four, philanthropist, and fitness enthusiast are just a few words that describe her. She’s also a limb loss survivor, but that doesn’t define who she is. In fact, despite the loss of her right leg eight years ago, it didn’t take Hocker long to decide that she was going to reframe the loss as a positive in her life. And she’s been on the fast track to inspiring others ever since.

In September 2013, at the end of a busy week, Hocker headed out to dinner with a girlfriend. A misfortunate step in high heels while walking through the crowded restaurant resulted in Hocker rolling her right ankle. For several days, that incident masked a more sinister problem at the root of the intense pain that followed.

While her physician assured Hocker that it was nothing more than a sprain and torn tendon, the amount of discomfort and her intuition told her otherwise. Less than a week after the stumble, she was in sepsis from what was determined to be necrotizing fasciitis, caused by bacteria (most often strep A) entering a wound.

“I could feel it internally,” she says. “I wasn’t completely lucid, but I knew something was wrong.”

By the time she arrived at the hospital in an ambulance—driven by friends in her small Darien, Connecticut, community—Hocker’s organs were shutting down.

After emergency surgery and several debriding procedures, the infection was still climbing up her right leg, and a team of physicians made the decision to perform a transfemoral amputation of her right leg, leaving a short residual limb. But even that wasn’t a guarantee that it would save Hocker’s life.

“My kids were brought in that next morning before the amputation and my family was told to prepare for the fact that they may be saying goodbye,” Hocker says. “So much was on them—and the big joke of it now is that I slept through it all.” Hocker and her husband had filed for divorce shortly before the incident, and he was the one to deliver the news that she had lost her leg when she awoke five days later.

“My reaction was that I was glad someone was straightforward with me,” she says. “This was true of all my family and friends, who made me feel lifted, but still like myself.”

From the beginning, Hocker knew it would be important to surround herself with the people that would help her get well and would be invested in her recovery.

“My whole motto is, get your team, whether professional or personal, and figure out who is on your side,” she says. “I have been fortunate to find my people.” 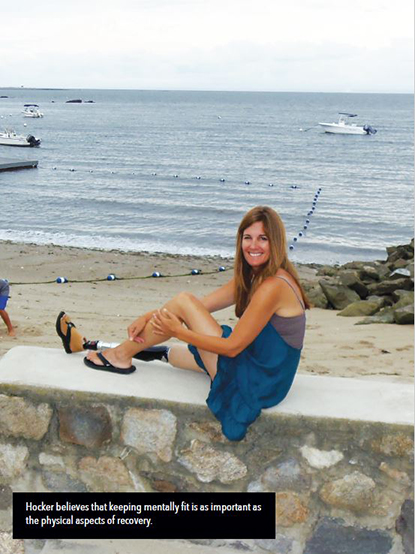 She is grateful to everyone who has touched her life, starting with the doctors and nurses at the hospital. In fact, she recalls not wanting to leave there because she wanted to be where people knew her situation and understood it. From the hospital, she went to a rehabilitation facility, and since then she’s had several different people on her team, including a psychiatrist, prosthetist, Reiki master, and personal trainer.

“If you lean on your people, then everything is relative,” Hocker says. “In rehab I saw many people who were so seriously injured, and these people are walking around embracing that they’re still here. When you are surrounded by people that have seen the worst, and yet you’ve seen them heal, that’s what feeds you.”

Hocker has taken that spirit and poured it into her own life. She has a big Instagram following at @kristinpcan, as well as in the Peloton community, where she leans into her love of cycling.

“We have similar experiences, challenges, and goals—and we are all stronger together,” she says.

Hocker also credits the prosthetic devices and supporting products she uses as essential to her resiliency because they enable her to better keep pace with her busy schedule and stay active. Over the past eight years, she’s used three different prostheses. She currently ambulates on an Ottobock Genium X3 microprocessor knee.

“Kristin has gone through an acute and traumatic experience,” says Salvatore Martella, CPO, Progressive Orthotics and Prosthetics, Albertson, New York, who has worked with Hocker since 2015. “She is resilient and extremely motivated to live her life as she did before, regardless of her high level of amputation.”

While dealing with the ins and out of how a prosthesis fits is an ongoing process, she has great respect for everyone in the profession.

“They are artists and scientists, and their creative minds are probably always crafting,” she says. “If I am in pain or not at my best gait, then it isn’t good enough for my prosthetist, and he works to find a solution.” 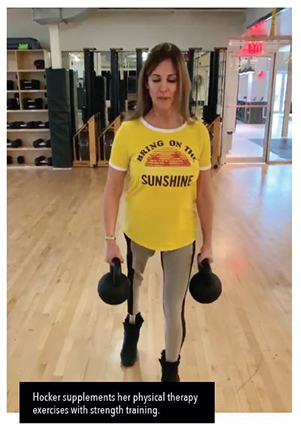 Hocker uses the Liner Wand prosthetic lining cleaner as well, which she said is key to reducing the skin irritation that liners and other cleaning products can cause based on her level of activity and the humid conditions in her home state of Connecticut. She likens maintaining her liner to how you would take care of your skin or hair, noting that it helps her to feel comfortable and fresh in her busy life.

In addition to her team of family, physicians, and prosthetists, Hocker says her work as the director of Maplewood Heart Foundation, a public charity supporting senior caregivers, as well as the community she’s built on social media, have been particularly fulfilling. Both have been instrumental to her recovery and to maintaining her positive outlook.

“Thank goodness for social media because you find people with similar amputations that are also young—and I think finding ‘psychographics’ is just as important as demographics,” she says. “We aren’t reducing this to a physical disability because we’re still people.”

Hocker says people are her biggest gifts and her biggest challenges. She is very in tune with how others process her amputation when meeting her. She sees it as a blessing that the challenge she is living with is a visible one.

“You don’t have to explain it. Everyone can see it, so you can focus on the solution,” she says.

She particularly loves it when children approach her and she has the opportunity to talk to them and educate them that an amputation isn’t a taboo subject or something to be feared. 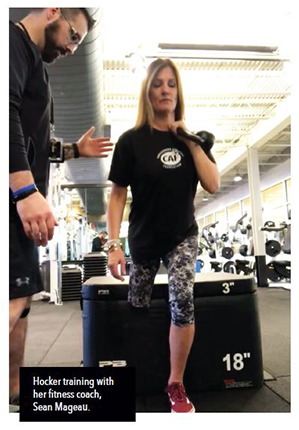 “It’s great when kids are curious,” she says. “My own kids have been my spirit—they just want their world to go around. They keep me honest, and they call me out.”

Because she is thankful for everyone who has inspired her, Hocker tries to give some of that inspiration back to others every day.

“I have come a long way,” she says. “And wouldn’t it be nice if I could help someone in their journey? If anything I share helps just one person, then it was worth it.”

It’s apparent Hocker has helped to inspire more than one. Perhaps one of her favorite quotes from Helen Walton best sums up Hocker’s mantra: “It’s not what you gather, but what you scatter that tells what kind of life you have lived.”

The National Association for the Advancement of Orthotics and Prosthetics (NAAOP) has named Maggie Baumer, JD, president for 2022. Baumer...